It's the last weekend of the season and I'm still experimenting with different canopies. This time, it's a Katana 150 I'm borrowing from a friend.

Returning to a Katana after the demo Crossfire 2, I find that I adore the increased airspeed. I can fly faster on this Katana 150 than I could on the Crossfire 2 149, due in large part to the lightness of the front risers.

That extra airpseed was extremely useful today. The winds up top were exceptionally strong: 27 knots ground speed on jump run, so something like 70 mph at 13000' and forecast to be something like 30 mph at 3000'. I was first out on first load, and I chose an exit point a little over a mile away. Freefall drift was such that I opened up slightly short but quite a ways crosswind, and the canopy winds were moving me backwards at full flight. I got on my fronts and managed to crab back to the airport with enough altitude to fly a landing pattern, but on the Crossfire 2 (or my Sabre 2), I would have been forced down in the corn.

Well, that's not true. If I had a slower canopy, I would have stayed on the ground. Knowing I had a Katana, I chose to jump on load one, trusting that the canopy had the ability to make progress even if I had to fly into the wind. Sure enough, I needed to do exactly that, and the Katana delivered.

I put four jumps on this canopy today.

It opens way better than the Katana 170 I demoed a month ago. The openings were my primary complaint with that Katana, but this one feels very different. Like the 170, this Katana 150 still searches when it snivels, but it inflates much more symmetrically.

It handles much like the Katana 170, though a bit snappier, which is expected due to the smaller size. Rears feel the same, fronts feel the same (and I love it!), though brakes feel a little different.

I noticed that the brake lines look a little different too: 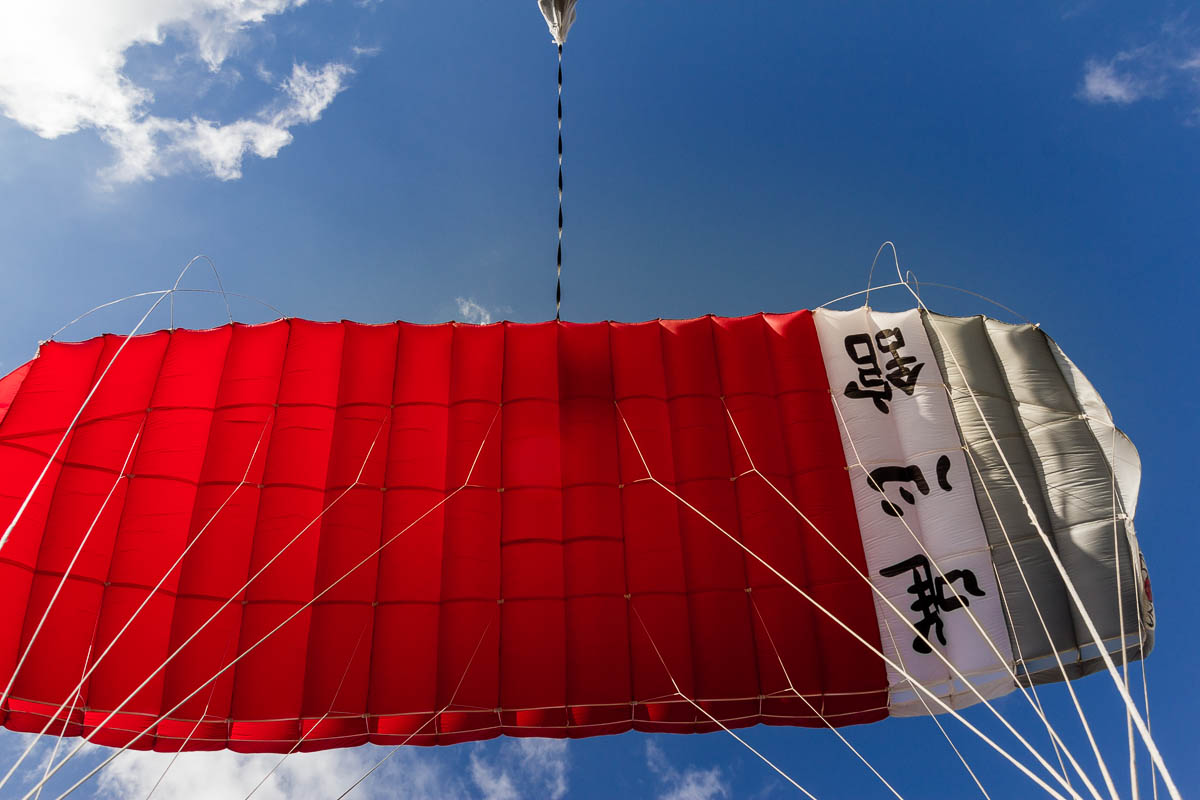 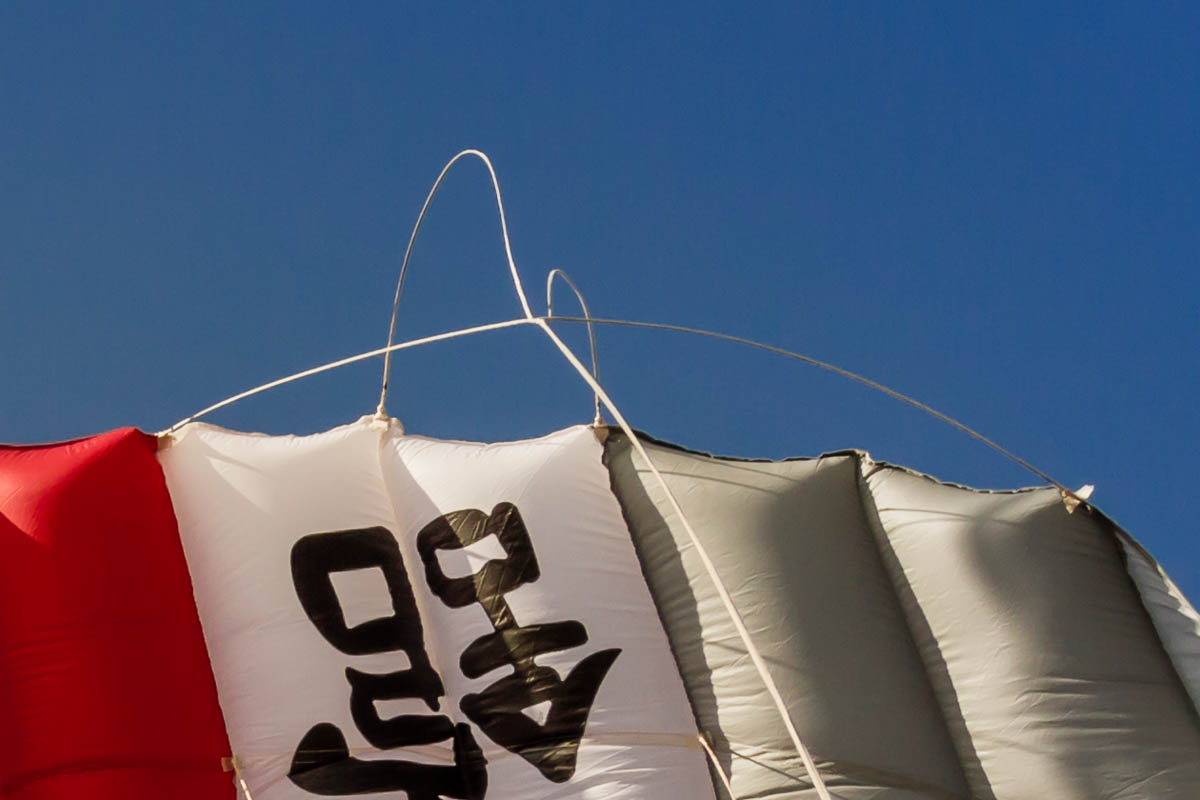 The Katana 170 didn't look like that, so this caught my attention. According to the Katana line trim chart, the upper steering lines should be arranged from longest to shortest, with the shortest lines towards the outside. I examined the canopy after the next jump, finding: 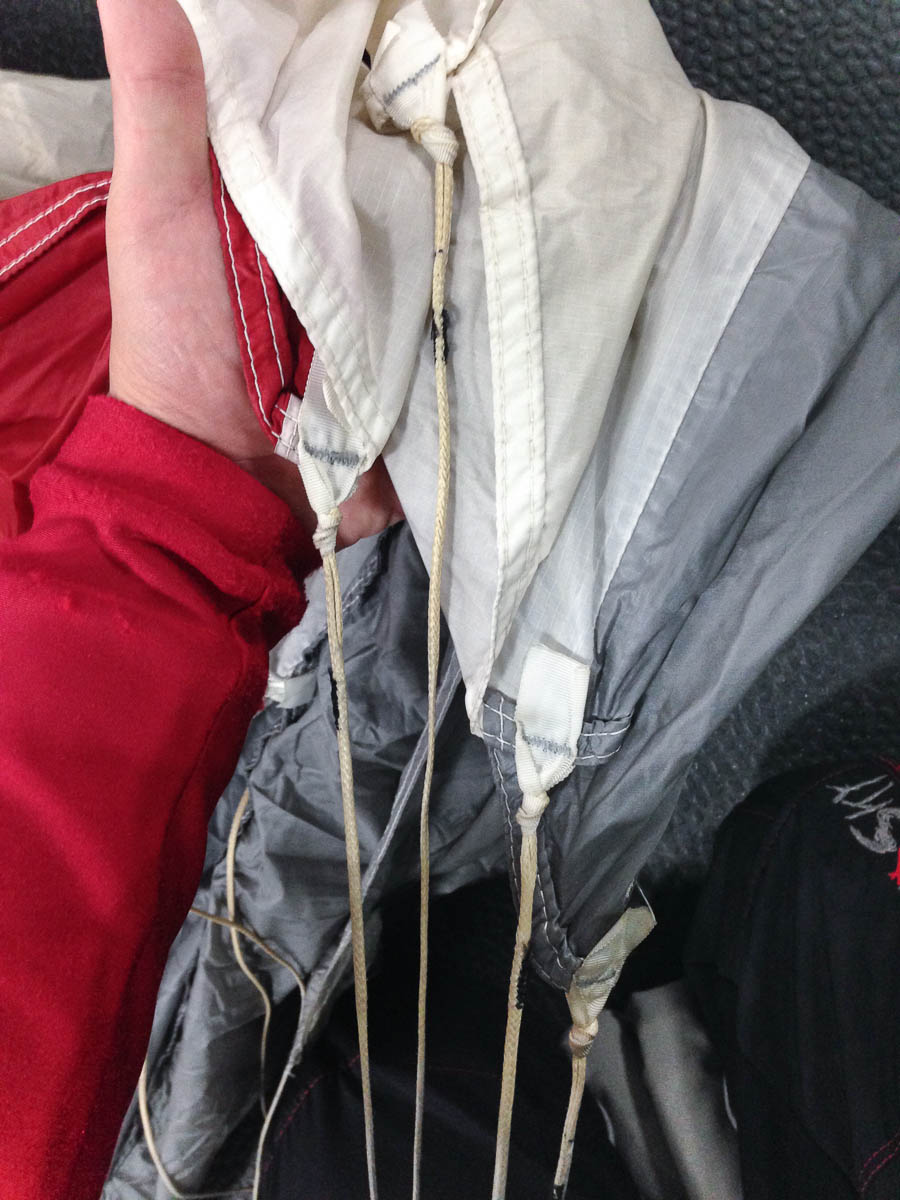 A-ha, proof! The innermost upper steering lines were switched with their neighbors when this canopy was re-lined. The trim chart indicates that this arrangement is not correct for any size Katana, so I'm really not sure what the rigger was doing.

Besides looking strange, I suspect this might be why the toggles don't respond quite the way I remember, and why the stall point isn't where I expected to find it.

My friendly local rigger (who did not perform the re-line) intends to take a look tomorrow. It should be a quick fix thanks to the bar tack machine, though Katanas use HMA lines, and HMA doesn't really like having stitches pulled out.

So, again, I've made four jumps on this Katana 150 so far and three of the openings were far better than the Katana 170. The odd one out was a toggle fire. The parachute opened normally, but quickly started turning and diving just like I was pulling on one of the toggles – or, say, because one of the toggles came loose while the other was still stowed.

You can fix this by a) grabbing the loose toggle and pulling it or b) by un-stowing the still-stowed toggle. And sure enough, in my case, I easily arrested the spin once I got the toggles in my hands.

A toggle fire isn't terribly surprising. It's not normal for me, but these aren't my normal risers and these toggles don't stow the same way, so I must have done it wrong.

At least, that's what I thought.

See, the canopy felt fully inflated, then it started turning rather aggressively, exactly as if I was holding the right toggle to about hip level. That perfectly fits the profile of a toggle fire, so I went for the toggles. I focused on securing the left toggle, because that's the one that must have popped loose, but I ended up grabbing and releasing both at the same time. 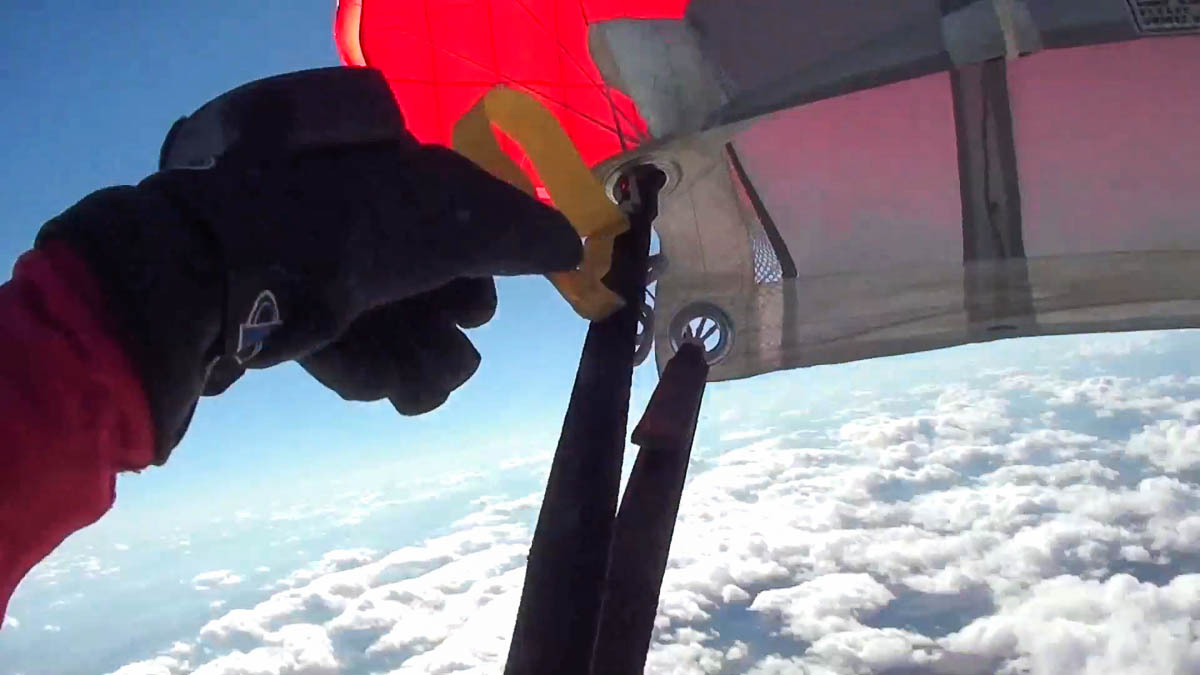 Except… the left toggle isn't loose. It's firmly seated. You can see the steering line tucked onto the back of the riser, indicating it's still properly set. I can't say for sure what actually happened; it felt exactly like a toggle turn, and not a front riser, rear riser, or harness turn. Still, I can say for sure what didn't happen, and according to the video, the left toggle did not release before I pulled it.

This was not a toggle fire.

My best guess is that this was a tension knot involving the right brake line. The video neither supports nor refutes this hypothesis. Still, I was chasing a CRW group, so this was a slow (subterminal) deployment – prime territory for tension knots – and releasing both brakes as I did could conceivably clear a tension knot on the right side. It fits the evidence, but I just don't know.

I'm still on the fence about what to put in my new container come spring, but I am glad to be jumping this canopy. Also, it's for sale, and it does match my colors…