I've been tinkering with the Chicagoland Skydiving Center network in preparation for the 2014 Independence Boogie. This is generally a large event, and this year is no exception: 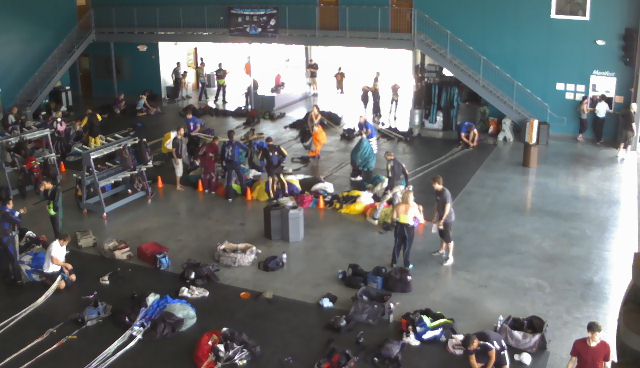 The vast majority of the people on the network are guests on wifi.

CSC can be broken down into three domains:

Both the south building and the main hangar are served using three access points. Their locations, frequency assignments, and antenna coverage patterns were carefully chosen to avoid interference and to provide consistently high perforance, especially under load.

The couryard is easy enough to handle with omnis, but CSCity is a problem. Residents expect their cell phones to pick up the CSC wifi inside their trailers – even though trailers are basically Faraday cages. We can serve 5 GHz clients using directional antennas, but 2.4 GHz doesn't give us enough channels to make that a viable option, so we've been running with a single omni.

I'm pretty happy with the performance during this event:

The main hangar access point has the highest load (see all those people on the packing mat?) but performance is excellent: 0.1% retransmit rate, 22 mbps throughput, 60 associated stations. Note also this access point is using only 11 dBm EIRP.

Other drop zones (*cough*) have networking poor enough that I bring a 3G hotspot. CSC's network makes me happy to live here full-time.